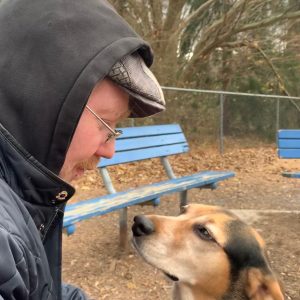 Jesus had a dog. Period. I know I’ve just violated the major rule of communication.

Don’t ever start with the Aha! conclusion; it may end up wagging the entire proclamation.  But, Jesus had a dog. I want to tackle the two complications in that simple relationship head on. Let’s start with the second one. Dog.

I don’t have a long history of canine relationships. I didn’t have a dog for nearly 60 years. Maybe that was due to allergies, living in parsonages or perhaps an early exposure to Mother Jones’ famous labor speech given on the steps of the capital of West Virginia in the midst of the bloody coal wars.

“The womanhood of this State shall not be oppressed and beaten and abused by a lot of contemptible, damnable blood-hounds, hired by the mine operators. They wouldn’t keep their dogs where they keep you fellows. You know that. They have a good place for their dogs and a slave to take care of them. The mine owners’ wives will take the dogs up, and say, “I love you, dea-h”. Now, my friends, the day for petting dogs is done; the day for raising children to a nobler manhood and better womanhood is here.”

Given that history, how did I come to own a dog or as I’ve learned, how did a dog come to own us. That relationship started with a phone call from our son. Any call after midnight in a parsonage is usually bad news. What I hear is unexpected, “Mom, would you like to have a puppy?”

No. I make that really clear. I have a two-hour commute to Drew, a long day of teaching, weekend preaching. No. I do not want a puppy. And the answer’s still no when he describes finding three really cute puppies dumped on the sidewalk in freezing weather. I make sympathy sounds, but I’m still very clear. No. No puppy, but I relent enough to offer to pay for their shots at a shelter. That ends the call, but not the conversation. In less than 20 minutes, he’s back on the line explaining all the shelters in WV are kill shelters. Three days and it’s deadline. He asks me to wake his dad up.

Twelve hours later a golden puppy with bright brown eyes and a name tag, “Hannah Arndt” arrives. We are now related to a dog and the household creed over our sink reads: “My goal is to be as good a person as my dog already thinks I am.”

Given that canine relationship, I come to the story of the Syrophoenician woman, Jesus and dogs with a different relationship. Matthew 15:21-28 is the text and I want us to concentrate on relationship that involves recognition in this story. It’s a Christological question, even though we’ve got this week’s sound bites from the White House about a former employee who’s been dismissed with an uncomplimentary canine term that works like a dog whistle for some in the pack.

I want to keep your eyes on Jesus. This is the time, the place, this request for healing is where you need to figure out who he is. Who is this Jesus? If you read this encounter as evidence of Jesus’s divinity, this means he’s testing this desperate mother. He uses a playful pet name, and reminds her of her place to challenge her to rise to the occasion of radical trust. If you receive this text as evidence of Jesus’ humanity, this wise, and witty woman teaches him about the true nature of his mission. It’s a complex choice about relationship, and I find Kathryn Tanner theological answer helpful.

But somewhere in that doctrinal divide I want to remind you that Jesus had a dog.

So that brings me to the first part of my proposition: Jesus. My matriarchal tribe was more into the third person of the Trinity. We nodded at incarnation but it was pneumonology, the Holy Spirit in which we lived, and moved and had our being.  We were raised on the miraculous. It was like having manna for breakfast.

Jesus seemed to be a somewhat disembodied relationship, although I lost track of the country church revivals where my sisters and I sang “What a Friend we have in Jesus”. Maybe it was simply because I didn’t have a brother.  I had no lived relationship, no way to recognize him.  I carried no Jesus pictures in my head, only songs about him, meek and mild.

Recognition is at the core of relationship. We recognize when we identify someone from having encountered them before. To “recognize” means to know again. So, my problem with Jesus in this text was the same problem I once had with dogs. I was missing personal memories, relationship in time and space. I had no ability to recognize who I’d not encountered.  And then, that changed. How? How did God, dog, and Jesus get connected?

One change came from reading about traditional attitudes about dogs in Hebrew scriptures. “Jewish tradition does not expressly prohibit the keeping of dogs as pets, but biblical and rabbinic sources do include numerous references that associate dogs with violence and uncleanliness and frown on the practice of keeping them in one’s home.”  So, dogs are for the most part portrayed negatively in scripture, and sometimes dogs get linked to prostitution. So, they were scum, dirty, dangerously, needy, outcast, definitely not welcome under the table.

Who does this remind me of? Something about Jesus’ relationship with the needy, the outcast? Would the one who ate with sinners draw the line with dogs? And why does Jesus talk about dogs and children, why does he put them together when he says “No”. Puppies and kids. What does he make of this clever, desperate mother turning the tables on him, “Lord, even the crumbs, Lord, will be enough.”

Here’s what I know about this relationship, only because I know a dog and because I know Jesus had a dog. I think he laughed when he heard what she said. I think he laughed because he remembered feeding some scrappy mutt under the table. Jesus had a dog. Of course, he did, some outcast, abandoned, unwanted scrap of fur. He’d once fed a dog under his family table. That sounds just like Jesus I’d been expecting.  He remembered that.  He recognized that relationship, and then he laughed, and then he healed the child and blessed her mother.

Jesus had a dog. I have a dog. Relationship. Schleiermacher was right, faith is “dependence, absolute dependence”. What a friend I have in Jesus. In that knowing, in that relationship, in that recognition, in the encountering now and before, we come to this table, this table of grace. We know Jesus now; we recognize him now and we will know him when he comes again.

Here, let me show you how this gospel works and then you are invited to come to the table where there’s plenty of grace to go around.

Look, it’s an image of the Inn at Emmaus. There’s a dog asleep under the table. The disciples are discouraged, in grief. But if you turn sculpture around, you’ll see what happens when the bread is blessed and broken. One disciple falls off his chair; the other can’t believe his eyes. Only the dog is jumping for joy. 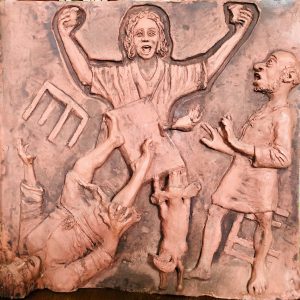 “They recognize him in the breaking of the bread.”

I believe I will recognize my Friend when we meet again. Eugene O’Neill says it best.

“No matter how deep my sleep I shall hear you, and not all the power of death can keep my spirit from wagging a grateful tail. I will always love you as only a dog can.

[i] Kathryn Tanner, Jesus, Humanity and the Trinity., p.21