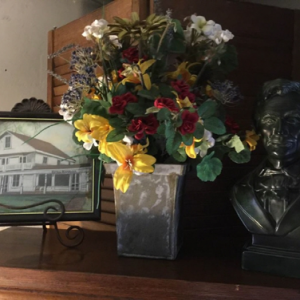 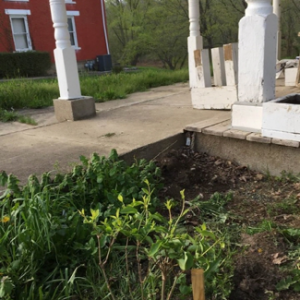 “When lilacs last in the dooryard bloom’d”…

I planted two lilacs today. The planting was scheduled to mark the 150th anniversary of Lincoln’s death this last Wednesday, but the post office delivered them to a surprised someone in Elizabeth New Jersey. My new order arrived today, just as the rain stopped, so my older sister and I prepared a place they can call home. I didn’t say why I’d ordered them, but she recited the first line of Whitman’s lament for Lincoln as we cleared away the clover and the dandy lions. Lilacs for Lincoln. They’re planted on either side of a squared space of brick, right in front of the parlor window. My younger sister laid the brick in her season of owning this old inn. It’s been waiting for its purpose and the lilac anniversary provided it. Soon and very soon a hand carved statue of Lincoln will stand here between the lilac bushes. He was the authorizer of our identity as a state. He signed the Emancipation Proclamation and approved a new state almost in the same breath. West-by God-Virginia. We seceded from the Confederacy. Mountaineers are always free.

That history is harder to decipher these days. Every Pioneer Day, for example, an entire regiment of Confederate re-enactors set up camp by the Elizabeth Courthouse. A mock battle is fought between the Rebels and the Yanks. The Rebels always win. This year a young Union officer was shot and fell right beside the sign that reads “Little Kanawha Hotel, 1800”. It helps to know that winners and losers brush themselves off, put their weapons down, and have a beer together. It also is important to keep track of the number of Confederate flags displayed year round in trucks and homes. It’s still the war that everyone refers to as “The War,” and discussions about seceding from the Union aren’t just history lessons. Putting a statue of Lincoln in the front yard will be our way of joining the conversation.

The lilacs’ late arrival formed a strange time warp between the 150th anniversary of Lincoln’s death and the 20th anniversary of the Oklahoma bombing. Before he drove the truck/bomb into the city, Timothy McVeigh donned a T-shirt bearing an image of Lincoln and the words, “Sic semper Tyrannis”.”This always to tyrants!” is what Brutus shouted during Caesar’s assassination. John Wilkes Booth shouted those words after he shot Lincoln. They were/are the Virginia state motto.

Will the rare sweet fragrance of “with malice toward none, with charity for all” survive our smoky choke hold of violence, our love of uncivil wars?

The leaves on the small plants droop, then straighten as they settle in at the Apple Pi Inn. What state will we be in when these lilacs first bloom?

When lilacs last in the dooryard bloom’d,
And the great star early droop’d in the western sky in the night,
I mourn’d, and yet shall mourn with ever-returning spring.

Ever-returning spring, trinity sure to me you bring,
Lilac blooming perennial and drooping star in the west,
And thought of him I love.

In the dooryard fronting an old farm-house near the white-wash’d palings,
Stands the lilac-bush tall-growing with heart-shaped leaves of rich green,
With many a pointed blossom rising delicate, with the perfume strong I love,
With every leaf a miracle—and from this bush in the dooryard,
With delicate-color’d blossoms and heart-shaped leaves of rich green,
A sprig with its flower I break.
Walt Whitman