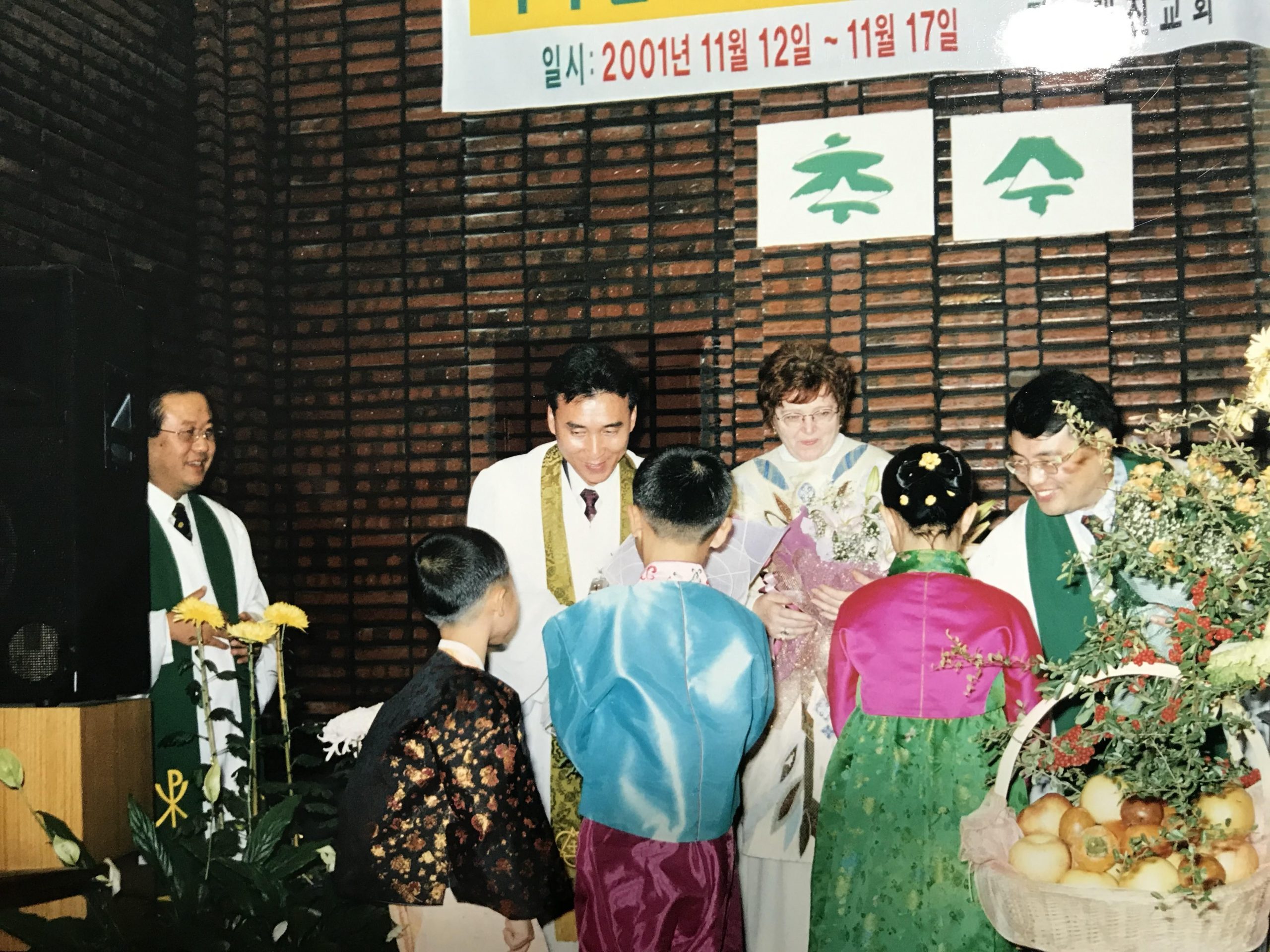 Human life is a mystery, beginning to end. The only wise response I’ve learned to the question, “Why?” is also the best prayer, “Thank you.” Gratitude in the face of mystery is less an answer, more an attitude.  I learned this again in the Daejin Korean Methodist by the Eastern Sea. It is located on the top of a hill overlooking the last civic structure in South Korea, a lighthouse.  The beam from that lighthouse shines directly into the church’s windows, reminding the pastor, YeongSeop Jeon, of the Church’s mission, being a light for Christ so that those at sea can find safe harbor.

It’s the time of Chuseok, traditional harvest and family festival. The Korean word for “give thanks” is displayed like a fine painting, and mounted at the front of the sanctuary. A community feast is going to follow the service. My translator and mentor in all things Korean is Dr. Sehyoung Lee, a Drew alum. The Thanksgiving liturgical design is very beautiful. A wooden stand that is used like a backpack by vendors is holding a rainbow of vegetables and fruit. There are clusters of red peppers, kimchi pots, drying herbs.

It’s going to be a service of spoons. I’d learned something about traditional Korean spoons over the three months. In traditional Korean culture one has a lifelong relationship with a spoon. If it’s given as a gift to a child it’s a small size. When the child grew, the mother would take it to a metal worker and have the spoon handle extended, so it grows just like the child.  Korean spoons, even contemporary ones, have a more intimate connection in a person’s life than most of North Americans experience.

I’ve asked the pastor to have each member of the congregation bring their spoon when they come to church this Sunday. Everyone arrives, spoon in hand…  They are mystified by the pastor’s request, but they’ve done what he asked. “What are the spoons for?” they ask at the door. Every one wants to know about the spoons. I say it’s a mystery. The laugh. They like this.

I ask them to consider what it means when Jesus tells us, “Feed my lambs.”  I don’t need to remind them of what they know better than I do, that there are children and elders starving less than 20 miles away, separated from them by barbed wire and half a century of war. I plan to say grace, eucharistia, “Thank You” and ask for a blessing on our spoons.

If the service started with a mystery, it deepened before the day was over. After an extraordinary meal for which I was very thankful, I was invited to tour the military facility that’s marks the line between two countries still at war. The 38th parallel was more than geography in the homes of Korean War veterans. I wanted to see a place that mattered more than words could express to my father. It meant more and less than “Thank you” in a war that wasn’t won, just put it on holding for more than half a century now.

A group of us caravanned together. Many Koreans aren’t permitted to visit until they are invited by an officer of rank. The station was on high alert. 9-11 had just happened the month earlier, and the streets of Seoul were lined with young soldiers guarding American-associated businesses. The landscape, edged by the Eastern Sea, was incredibly lush, and the sky as blue as blue can be. I walked from corner to corner in the tower behind bullet-proof glass, just looking at the beauty and the threat. Miles of barbed wire and thousands of explosives were surrounded by seemingly untouched shades of green.

Pastor Jeon and his church leaders were talking as they looked through large telescopes that brought North Korea very close. The conversation flowed like a quiet stream, until suddenly the tempo changed. I didn’t understand a word, but I turned my camera and took a picture of them. Their body language and their language suddenly changed again so I took another picture. Some of them were laughing, some were shocked, some just looked mystified at whatever they were seeing through those lenses. 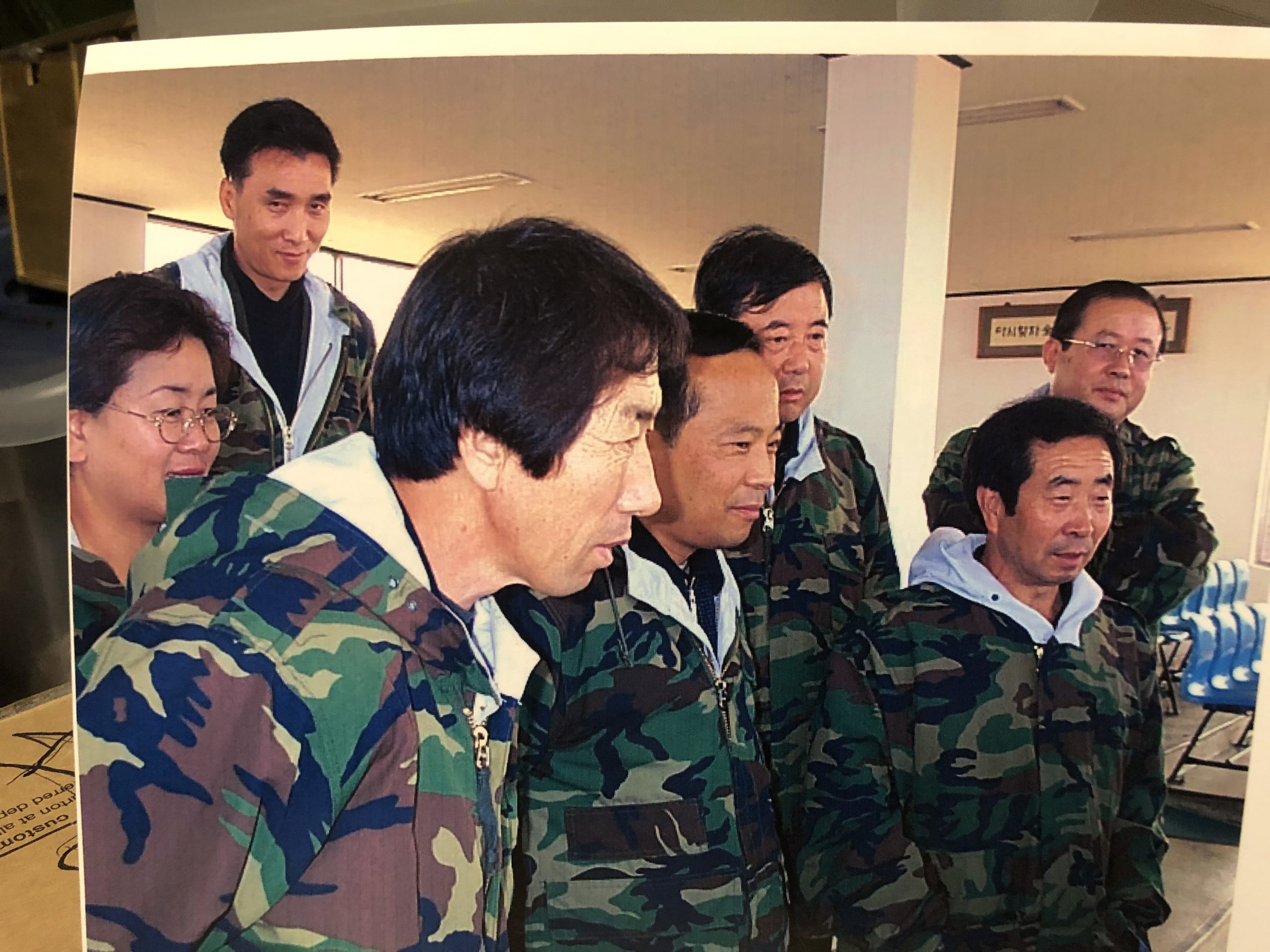 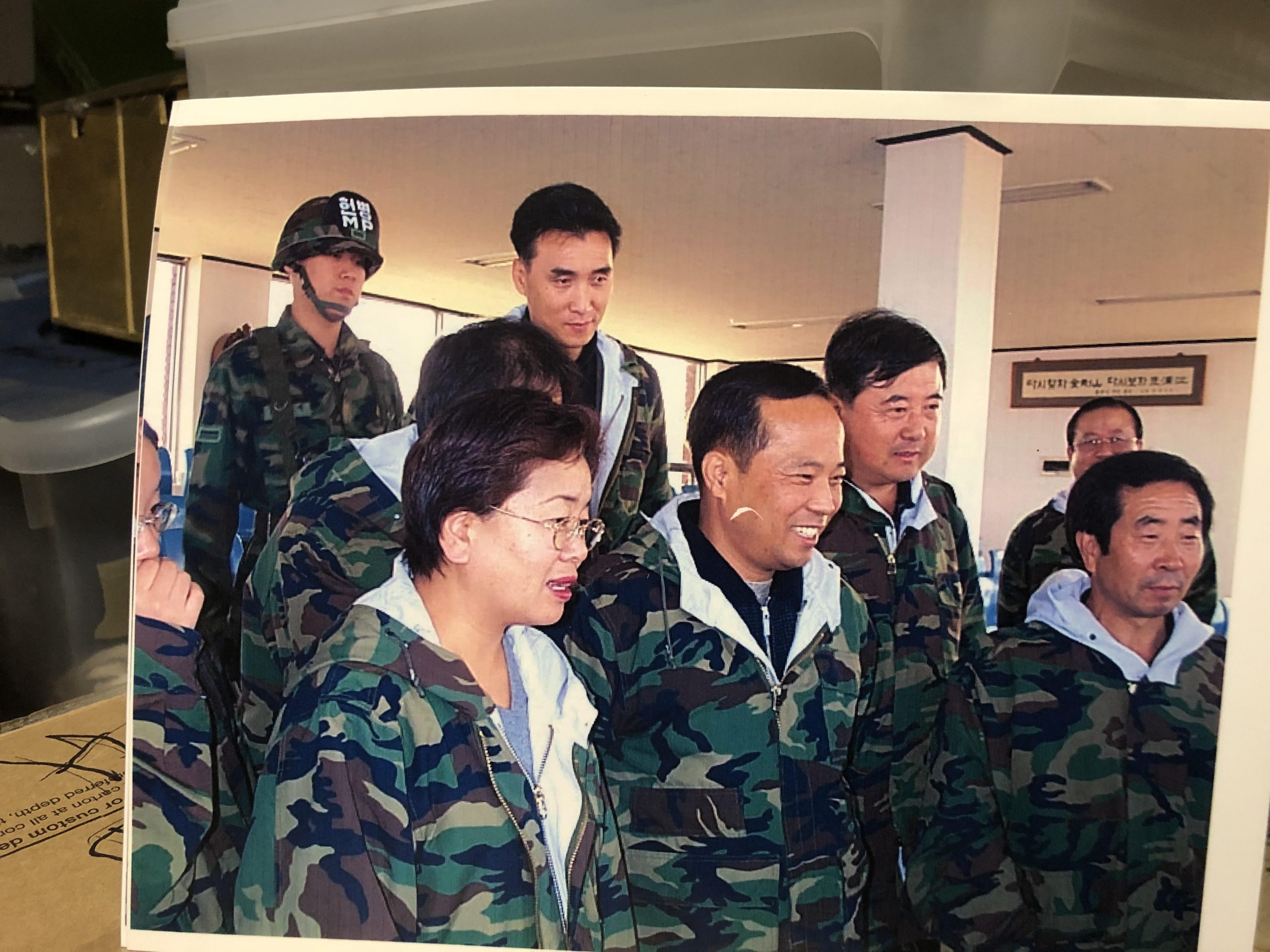 After a moment, one of the men offered me a look. I took it and then stepped back very surprised, and red-faced. At the other end of that lens was a young North Korean man, stark naked. Dr. Lee filled in the background. A small North Korean boat had landed on a small island in the no-man’s area of the sea. Five or six soldiers got out and were walking around at the water’s edge. I realized why there were now red lights flashing in the tower. One of the men had unexpectedly taken off all his clothes and dove into the sea, swimming for the South Korea shoreline.

It was very cold; the distance was over a mile, no one expected him to make it to shore. But there he stood, as naked and dripping wet as the day he was born. I could feel the hesitation in the tower.  For one brief moment, there was a pause in the business of war. It was only a moment. The alarms went off; the armed jeeps roared toward the beach; he would be shot. No one is allowed to defect on the 38th parallel.

He stood there framed between sea and sky for a moment more, then he turned and dove back into the sea before the shooting started.  When he reached the island, he got out, got dressed, and he and the others got into the boat and rowed out of sight of the tower.

What was that? What did it mean? What had he wanted?  We talked, I mostly listened all the way back to the church and all the way home. Did he do it as a dare? Had he hoped for a welcome? Did he want to stand for just a moment, as one human being, baptized by the sea and free.