An anniversary is a way of telling time (returning annually); it’s a word inherited from Latin through Middle English to arrive in the 21st century. Year (annus) + Past Particle of “to turn” (versus). There are anniversaries of weddings, wars, births, deaths, and every human activity that a community wishes to remember, a time “to turn” to as the years pass.

Today I turn to the memory of wedding promises made over 70 years ago. Those promises directly connect to my being, since those words changed the legal, spiritual, social reality for those two people I call “parents”. I study their picture that rests in the Judge’s Room of the Inn on an old potbellied stove.* Did they know what they were saying those long years ago? The nation was at war; their minister an Army base chaplain; all the men were in uniform, ready to be deployed. Did they believe their promises would keep?

Wedding vows are one of the few examples left of performative language: words that do what they say. The authority to “pronounce” the result of promises used to be more limited and less controversial. Judges, magistrates, and clergy would pronounce and the counting of anniversaries would begin. The Supreme Court opened the door and widened the wedding aisle this summer. Their decision created an anniversary that will be celebrated for years to come by communities wise enough to recognize the power of promises worth keeping.

” Will you love, comfort, honor, keep in sickness and in health, and forsaking all others, be faithful…as long as you both shall live.”

I have spent this year sorting out what inherited bits and pieces of my parents’ promises to keep. What can be given away or thrown out? What is the rule of thumb that helps us to handle “tradition”? Every day can’t be an anniversary. Some memories should be forgotten. Surely it’s a safe bet to trash the odds and ends of coloring books stored a child’s set of plastic drawers stored in a shed. 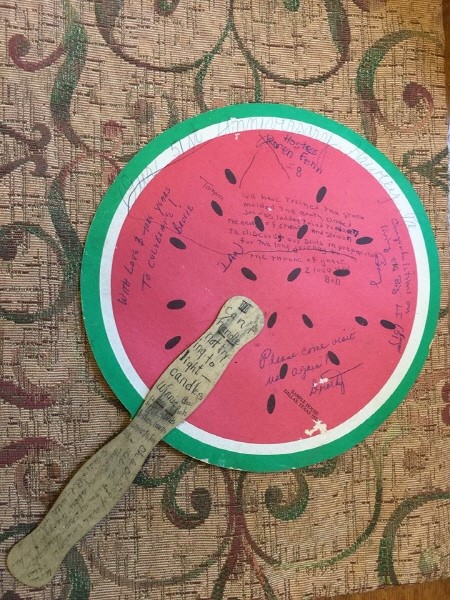 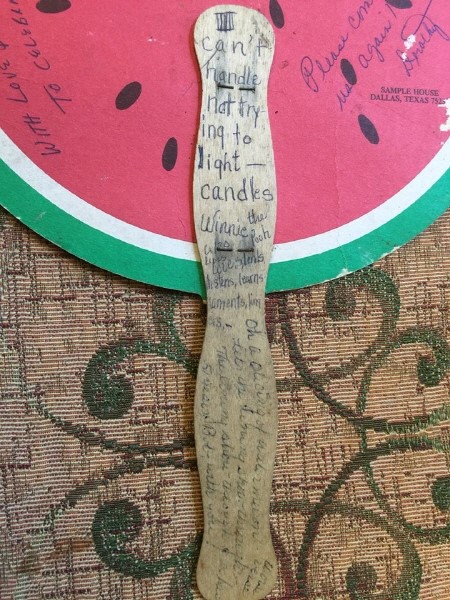 It’s only my fondness for fans and watermelon that saved this relic of their 51st anniversary promises. I retrieved it from the trash and turn it over to find, written on the fan’s handle in my mother’s hand:
“I can’t handle not trying to light candles. Winne the Pooh who lives, loves, lends, listens, learns, laments. . .” (Her last word is illegible.)

Written in the left-handed block print my father had to learn when his right hand was severed by a hay baler is the following:

“We have touched the stars,
molded the earth, climbed
Jacob’s ladder, tried to meet
the needs of others, and striven
to discover our souls in preparation
for the long journey to
the throne of grace.
I love you. Bob. “

Happy anniversary to all who keep such promises.

*It took me 10 years to notice my father is wearing a Drew Theological School Orientation t-shirt in this photo. 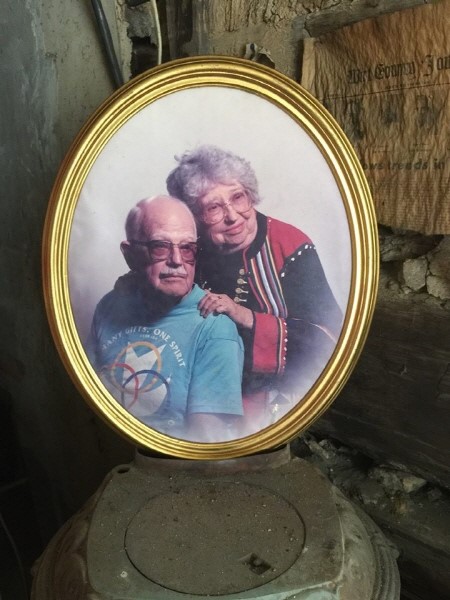