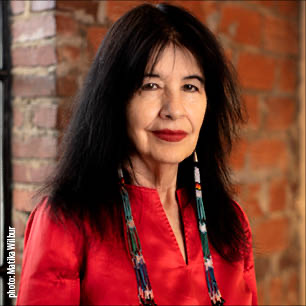 Where does a story begin? I invite you to join me on the Trail of a story, a Trail of Joy and a Trail of Tears. I’m sitting in a classroom, not as teacher, but as a student like the others in the room. Joy Susan Harjo, poet, activist, musician, advocate , member of Cheyenne and Muscogee nations, has agreed to prepare us for a journey to Oklahoma, a place of birth and exile. How did we get there? With a UMC grant to invite Native American educators and leaders to teach the histories we never learned, and stories we did not know how to tell.

She begins with her name and its meaning Harjo (“so brave you’re crazy”). She shares her story and it’s complicated.  She’s not a lawyer, but she’s the primary force field behind the legal challenge to the US’s oldest trademark and logo: the Washington Redskins. There are billions of dollars and millions of fans who are positioned on the field against her. I see where the “crazy” in her name comes from. The legal challenge has gone into overtime, she and her community began the challenge in 1987; this is now 2015.  Yards gained and then lost as court decisions are overturned and new trademark lawyers join the line. Who owns a label: Redskins?  Its origin stories are part of the legal and cultural argument. Those of us listening have read enough to know the Federal Government once paid a bounty for “red skins”: women, men, even babies. $5 in Idaho, less in California.

So what’s in a name? A recognized social relationship. You may have wondered how a fight song ended up as a liturgical reading. Scalp ’em, swamp ‘um. Sons of Wash-ing-ton. Rah!, Rah!, Rah!

Is it worth fighting over? We asked Joy. We’d read the articles about the death threats she received, the FBI protection she refused.  So crazy brave is this attempt to confront colonization.  She shared the questions she asks herself: “Who are we before and after the encounter” of colonization. And how do we imagine ourselves with an integrity and freshness outside the sludge and despair of destruction? I am seven generations from Monahwee, who, with the rest of the Red Stick contingent, fought Andrew Jackson at The Battle of Horseshoe Bend in what is now known as Alabama. Our tribe was removed unlawfully from our homelands. Seven generations can live under one roof. That sense of time brings history close, within breathing distance. I call it ancestor time. Everything is a living being, even time, even words.”

Ancestor time. History within breathing distance. I was born in a tiny county in West Virginia, named for the lawyer, William Wirt, who took the case of the Cherokee to the Supreme Court and won. They won, but when a President can say, “But who’s going to make me follow the law?” everyone loses. President Jackson originally ordered the forcible removal of the Muscogee starting in 1836, and this was our national policy until all the Muscogee, Cherokee, Chickasaw, Choctaw, and Seminole land, homes, businesses and harvests had been confiscated. I share a painting, done by a Cherokee artist, of that terrible trail. If you look closely at the blanket covering the woman’s head, you’ll see that it’s made up of first class postage stamps, Liberty. Justice. all of them canceled.

Joy’s people, her nation, were one of these “Civilized Tribes”, called Creek by the colonizers, Muscogee by themselves. Why civilized? They’d signed the treaty and kept it. They learned English, put on white settlers’ clothes and customs, traded hunting for planting, cotton for native plants, native prayer-chants for prayer books and traditional songs for Christian hymns. None of those forms of civilization protected them against the violence of manifest destiny and white supremacy. And so the forced march on the Trail of Tears began, over 5,034 miles. 15,000 forced to march, 3,500 of Joy’s people did not survive the exodus. 3,500 estimated lost, and that was only one of five nations.

We, who are listening to her voice in the classroom, will travel to Oklahoma. We’ll be welcomed into a UM Muscogee church. They offer to sing for us one of the hymns they sang on that terrible trail, a song they sang as they were forced marched, as women were raped, and the old and the young died from hunger and cold and were left behind. We weep as they sing, for we all know the words and the tune.

Those who survived were transplanted to Oklahoma where there were other native peoples. New treaties were made. This would be Indian Country forever, but… oil, and Congress’ homestead laws, the Land Runs, then statehood, and …you know how the story of broken treaties goes.

In case you ever want to brush up on treaties, visit The National Museum of the American Indian in Washington DC. It located across from the Capital Building where every treaty must be ratified. Joy told us about the newest addition, the Treaty Room. She was the exhibit’s curator overseeing the displays, preparing for its opening. By the time you reached the end of the room, scanning every text, you’d realize the landscape of loss of this nation, ink trails of broken promises. Even broken, Joy believes they witness to remembrance and survival. “I feel strongly that I have a responsibility to all the sources that I am: to all past and future ancestors, to my home country, to all places that I touch down on and that are myself, to all voices, all women, all of my tribe, all people, all earth, and beyond that to all beginnings and endings. In a strange kind of sense writing frees me to believe in myself, to be able to speak, to have voice, because I have to; it is my survival.”

And speaking of treaties, on July 8th, 2020, the Supreme Court(5/4) ruled that about half of the land in Oklahoma is within a Native American reservation. The court’s decision hinged on the question of whether the Creek (Muscogee) reservation continued to exist after Oklahoma became a state for the purpose of federal criminal law. The tribe said: “The decision will allow the Nation to honor our ancestors by maintaining our established sovereignty and territorial boundaries.” Of course, it might be important to remember that it’s President Jackson’s portrait that hangs in the Oval Office these days.

Joy Harjo: So brave and so crazy. She’s named U.S. poet laurate in June 2019. So who’s crazy? Her peoples’ treaty is recognized by the Supreme Court on July 8th 2020 and the oldest US franchise formally retired the nickname “Redskins” on July 13th 2020 leaving the song’s title and its role in team lore undetermined at this time.