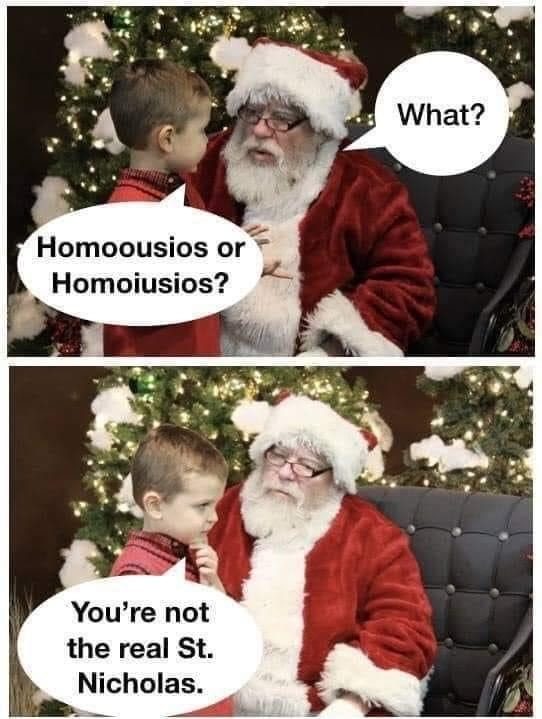 It was a curious assignment, even for Heaven. He’s been given a second mission for God. He’d completed his first mission so completely, so thoroughly that his earthly friends insisted on making him a bishop.  If that hadn’t been too much fuss and nonsense, they labelled him a saint long after he had exchanged earth for heaven.

Saint Nicholas. None of this fuss disturbed his real work of the Galaxy Charity Center. Heavenly hosts pay little attention to human fame. A Turkish bishop known for dropping gold coins in the stockings of the poor isn’t remarkable, but centuries have passed and suddenly there’s a question of a saint’s reputation.

It’s apparently a problem of fake saints. They’re for hire, wear pseudo-red velvet suits, and removable beards and claim they can fly.  They also shout so loud they frighten children. The worst part of this stolen identity is the fake saints help make the poor poorer and the rich richer.

Heaven wants a first-hand report and who would be better than the real Nicholas? He doesn’t even need an earthly disguise; his red bishop’s robe will pass for a red velvet suit. A simple wreath of holly berries. a symbol of Christ’s thorny crown, will blend in with season’s attire.

What should the saint take for the journey? Keep it simple: a shepherd’s staff, and a lantern.  His mission: find out if anyone still knows what Jesus really wants for Christmas.

In the wink of God’s eye, Nicholas is once again on earth. He sets out walking in the direction of the lights.  The roads are four times wider than the ones he’d once traveled. They’re backed up with noisy 4-wheeled inventions that supposedly used horsepower. The drivers made loud rude noises with trumpets hidden under the metal tops of their chariots.

Sometimes, however, the chariot riders seem to recognize him. They point excitedly as he walks past and they roll down the windows and wave. Nicholas stops when a little boy shouts at him.  But the name he hears isn’t his, “Santa something” and the request makes no sense. What’s a Xbox?  The saint simply waves and keeps walking.

He arrives at the small city of lights. It’s not a city, actually, but villages crowded together under one roof. There’s a village named Macy and one called Body Works, and another with Lord & something. Maybe he’ll find the saints there.

A woman wearing antlers stands at the entrance and greets him with the name the little boy had shouted. “Merry Christmas, Santa.” Christmas, the festival of Christ’s birth he recognizes. The merry part was new. But why not? Saints can be joyful. “And a holy night to you, my sister.”

Lord & something is a very noisy, busy village. Music’s playing, but no one seems to be listening to the song about the manger and baby Jesus. Everyone seems anxious, rushed, so not at peace. “Peace on earth” the invisible angels sing over their heads, but no one is singing with the angels. Nicolas notices that a man wearing a badge has begun to watch him closely, following him down one of the narrow streets lined with coats while seeming to talk to his hand.

Just then three boys surround the saint. “Hey, Santa, where’d you park your reindeer?” one demands. “Check this out, a survivalist!” He pulls the lantern up for a closer look.

“They’ve been drinking”, thinks the Saint. Young men had this problem in his time, too. The third boy is quiet, studying him while the other two rap nonsense about red noses and bowls of jelly. When one tugs on his beard, the Saint puts his crook to good use. The two trouble-makers beat a quick retreat, but the third remains, wary, watching. Something in his face catches the Saint’s attention.

The old man moves closer. “Is there something you need?”  The boy shrugs, turns away and then back again. His words tumble out, fierce, hot, and bright like coals. “Listen, I don’t believe in Santa. You’re just a stupid joke. But I…you know… you should be… there should be somebody needs to make a difference. You know what I want for Christmas?  Some way to make rent, or get groceries or goddam toilet paper!”

Now the boy is shouting and the man with a badge moves closer. “We need to keep fed and warm. Write that down on your list, Sam, or Santa, or whoever you think you are!”

He turns sharply, stomps past the badge guy, pushes by the antler-wearing woman. “On earth as in heaven” the Saint whispers a prayer as he makes his way toward the exit signs, following the boy past the parked chariots.  He keeps his distance down streets that narrow, and between houses that crowd together like they’re trying to keep warm. He stops at the street lamp that’s out at the corner house where the boy enters, and slams the door.

He’s got his list now, but where are the saints?  Heaven needs good down-to-earth help. Where are the believers on this night of nights?  Perhaps they still meet in homes. Maybe the persecutions which threatened the church in his time are still going on.

The Saint grips his staff and raises his lantern. The road is dark and comes to a sudden stop at a crossroad. Should he go to the right or left? Where could he find Christians on Christmas Eve? Left, or right?

He follows his staff that’s leaving left. The streets are quiet; snow begins to fall, but he knows he’s not alone. The light from a large window turns the snow into a rainbow and through the open door he sees the sign he’s been searching for. The Saint lifts his lantern, lighting the way for the boy who’s been following him.

Once inside they’re greeted with a smell of cinnamon and apples, candle wax and pine. The Saint and the boy are welcomed, offered seats, songbooks, and Christmas cookies. The people are already singing the same songs as the marketplace, but the sounds are much more merry.

The boy’s shoulders slowly relax, unstiffening as he listens. Some singers have silvered hair and rusty voices, and some sing, holding high notes as easily as they hold children. The Saint smiles to see the stockings and mittens hanging on a tree, waiting for children who need them.

Whoever these people are, Nicholas decides, they know what Jesus wants for Christmas: human miracles called kindness. They will know how to help the hopeless. The Saint shows the boy how to take the small candle when the basket comes by.  The boy then helps the old woman sitting beside him hold her flame steady. She thanks him in a whisper and asks his name.

This is how the light happens, Nicholas knows. There’ll be groceries the boy can carry, sidewalks to shovel, errands to run and, somehow, the rent will get paid; groceries begin to materialize, and one day, there will be a chance for the boy to go to school. This is how a list turns into Love: the light is passed, heart to heart and hand to hand.

Mission accomplished. The Saint can hear the heavenly host join in the earthly chorus: “Silent night, holy night, wondrous star, lend thy light; with the angels, let us sing…”

Written for those who need a saint, not a Santa.